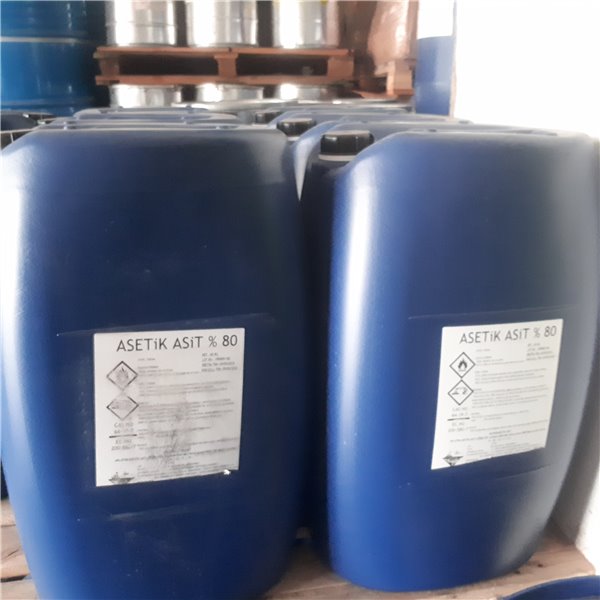 The chemical formula of CH3COO-H is in the category of weak acids in the group of carboxylic acids called the vinegar acid or the spirit of vinegar. Acetic acid is one of the most important carboxylic acids. It is also called Etanoic Acid in Chemistry. Another name of pure acetic acid is Glycine Acetic acid. It has a sharp, colorless and pricking odor. It has an irritating and corrosive property.
Since it is a weak acid, it is suitable for use as ph stabilizers. Acetic acid is a highly useful solvent for organic substances which is not easily decomposed by heating or is not affected by oxidants.

The sugar in fruit juices is converted to ethyl alcohol by the effect of yeasts. The resulting alcohol is converted into acetic acid into CH3COO-H by means of bacteria called Micoderma Acet.
C6H12O6 + (Yeast)? 2C2H5OH + 2CO2
(Glucose) (Ethyl Alcohol)

Carboxylic acids such as acetic acid can also perform molecule separation by central ionization of hydrogen in a carboxyl group (-COOH)
CH3CO2H? CH3CO2 + H
In the 1900s the production of acetylene was made by the following reactions:
CaC2 + 2H2O? Ca (OH) 2 + C2H2 (Acetylene)

CH3CH = O + 1/2 O2 (Mn)? CH3COOH
An oxide passivating agent forms an acid-resistant film because the tank of aluminum is used to carry acetic acid. Metal acetates can also be prepared with a suitable base, with acetic acid, as in the popular "baking powder + vinegar" reaction:
NaHCO3 + CH3COOH? CH3COONa + CO2 + H2
Acetic acid is also involved in the formation of esters.
Acetic Acid + Alcohol? Ester

The most important consumption share of acetic acid in the pharmaceutical industry is the use of aspirin. It is also preferred as a side product in many drugs and as a ph-corrector due to its low acidity.

5% to 8% of acetic acid solutions are used directly in vinegar production. It is used in salads, mayonnaise, sweet and sour pickles and many solar and meat curing and canned vegetables.
In the production of mayonnaise, with the addition of acetic acid, the resistance of Salmonella to heat is reduced. As it is suitable for yeast and bacteria, it is used in bread making if it is suitable .Asetic acid is also used in food sector to increase consistency and to take advantage of its protective effect.

It is widely used in the textile, food, cosmetic, leather, and pharmaceutical industries because it is a weak acid and easily miscible with aqueous solutions. It is the most widely used acid in textile industry. Generally, all emollients are reacted in acidic environments and are given to the bath to provide softening of the softener to the fabric.

Acetic acid is the main raw material in the production of sodium acetate (textile industry and food preservative), copper acetate (used as pigment and fungicide), aluminum and iron acetate (used as a colorant for paints). It is used as solvent in many reactions involving carbocations.

Acetic Acid is involved in the initial stages of reactions in many sectors. The most common use in the world is about 45% of vinyl acetate production.