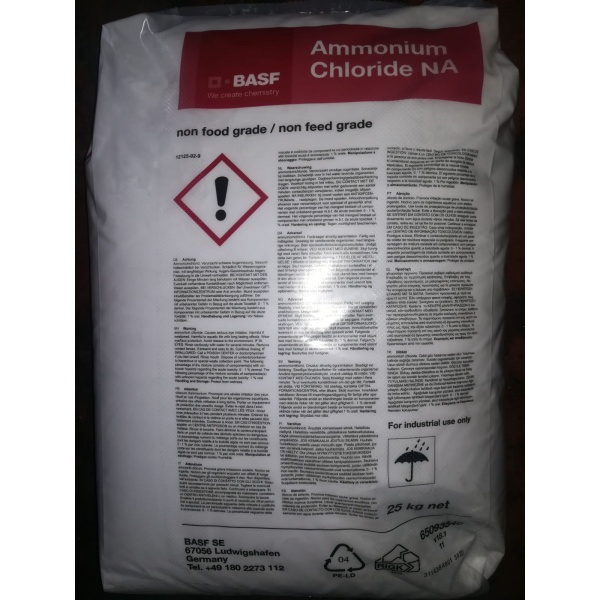 Ammonium chloride, whose chemical formula is NH4Cl, is an odorless, water-soluble cubic crystalline salt obtained by the combination of salt with urine. Known in most countries as ammonia, these substances, which are sublimed directly into gaseous, evaporate at temperatures of about 340 ° C, yielding equal volumes of ammonia and hydrogen chloride, short-lived since they are easily dissolved in water.

Ammonium chloride can be reversibly prepared by combining hydrogen chloride (gas) or hydrochloric acid (aqueous solution) or together ammonia (NH3).

Ammonium chloride; is a by-product of the Solvay method (ammonia-soda method) applied in the production of sodium carbonate.
It can also be obtained from the reaction of ammonium sulfate and sodium chloride solutions.

Ammonium chloride is used as a remover agent in cough syrup. causes irritation on the bronchial mucosa. This condition makes it easier for the respiratory tract to produce excess fluid by coughing. Ammonium chloride is used as a systemic acidifying agent in the treatment of severe metabolic alkalosis, in some of the mouth acid loading tests to diagnose distal renal tubular acidosis, to keep the urine from the pH of the acid in the treatment of urinary tract disorders. Many colds and cough medicines on the market also contain ammonium chloride.

Ammonium chloride, commonly used as a yeast food in bakery, is used as food additive under E510.

Ammonium chloride is used as a flux in the preparation of tin to metals such as coated galvanized or solder. This reacts with metal oxides on the surface to form a wavy metal chloride, which is involved in cleaning the surfaces of the parts.

As a hair shampoo, it is used as a thickening agent in ammonium based surfactant systems such as ammonium lauryl sulfate. Ammonium chloride is widely used in dyeing, tanning, textile printing and luster cotton in the textile and leather industry.