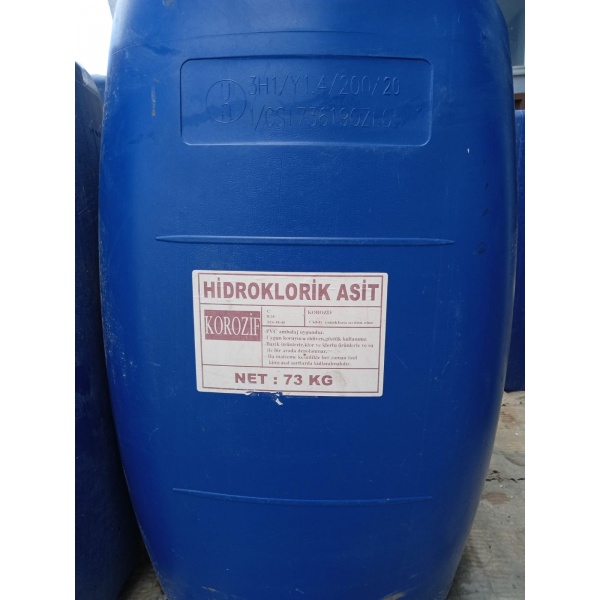 Hydrochloric acid with chemical formula HCl is a poisonous, clear, colorless or yellow liquid that is also present in the gastric water of hydrogen and chlorine elements. Water is also known as salt spirit among the public. Thanks to its inertia, many reactions can also be used with metals. It can be found in the concentration of 38%. It was discovered by the Arab alchemist Cabir Bin Hayyam in the 18th century and was later used in the field of alchemy.

Production and Reactions
Hydrogen chloride can be obtained by the action of sulfate acid to the sodium chloride salt.

Sulfur dioxide and oxygen mixtures can be obtained by the effect of sodium chloride.

Hydrochloric acid can release hydrogen as a typical acid property by acting on many metals such as zinc, iron, magnesium or aluminum.
2HCl Mg ---> MgCl H2
2HCl Fe ---> FeCl H2
When mixed in a certain ratio with nitric acid, a liquid called king water can be obtained.
They can be dissolved in a mixture of water (hydrochloric acid - nitric acid) which can affect most metals.
When silver nitrate reacts with hydrochloric acid, they may form a white chloride silver precipitate.

Chemistry
In this sector, the formation of organic compounds, the production of inorganic substances in the industry and to ensure the pH balance is used. In addition to the various forms of household substances are used in cleaning.

Oil
It is used in the oil sector by injecting into the rocks, to obtain results about the presence and / or quality of the oil.

Medicine
In pharmacology department, it is used to make the drugs ready for commercial presentation and to form the active substance into the form of a capsule or tablet.

Other
Due to its technical characteristics, it is used as a starting material, additive, catalyst, component in many sectors.