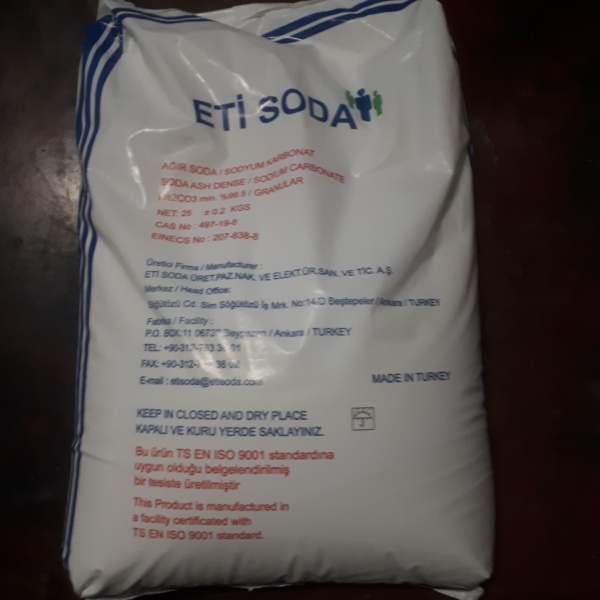 General Information
It is a chemical with its chemical formula Na2CO3, which has a clear colorless appearance. Crystalline soda (Na2CO3.10H2O) can be present. Although it is in the form of salt, its solutions are basic due to hydrolysis, so they can be titrated with strong acids with methyloranges indicator. This compound is found in minerals in certain marine plants and some rocks. Generally, its deposits are in Africa and Asia, but it is generally obtained artificially.

Sodium bicarbonate was converted into sodium carbonate, which was then heated to release water and carbon dioxide:

Secondly, it can be obtained with the same process as the solvay method.

CO2 is released when dilute hydrochloric acid is poured into the sodium carbonate solution. When this gas is interacted with Ba (OH) 2, the clear solution becomes cloudy and the white barium carbonate begins to settle, so that barium carbonate can be obtained.

Pine
Glass production is achieved by interacting with sand at high temperature and sudden cooling.

Paper
In the paper industry; It finds wide usage in many steps from water conditioning to pulping.

Textile
When reactive dye is used in the textile industry, sodium carbonate is used to form the bond between dye and fiber.

Chemistry
In this sector, it is used in water conditioning to precipitate Ca + 2 and Mg + 2 ions and to adjust pH when the environment is acidic.

food
It is used as an acid regulator, anti-caking agent and stabilizer as a food additive and is also used in the production of sherbet powder.

Hygiene
Sodium carbonate precipitates ions that harden in water as carbonates and removes them from the environment. In this way, it is used as a softener and whitener in washing machines.

Other
It is used as a foaming agent by creating friction and ph order in toothpastes, providing ph balance in pool waters, in order to stop hydrolysis in invert sugar production, as a building material or filling material in detergent and as a source of alkali in many sectors.