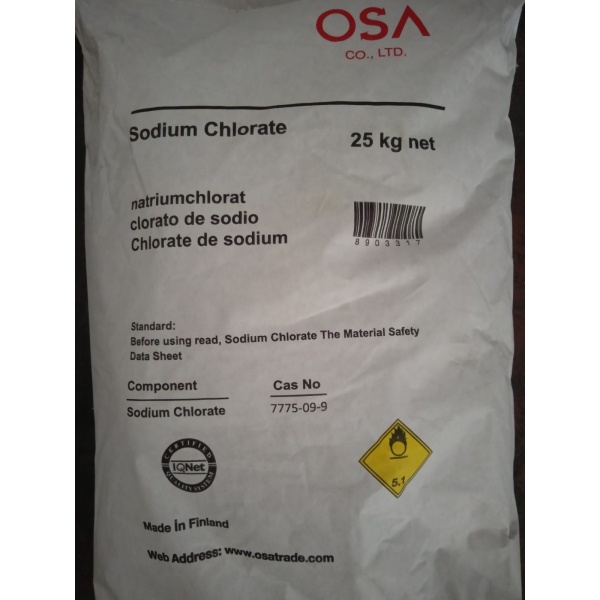 It is a chemical compound with a strong oxidizing properties, known as the sodium salt of chloric acid, of which the formula is NaClO3. It can be present in crystal form and in liquid form from 25% to 50%. It looks like a white crystal in a pure environment and is soluble in water. A significant moisture is attractive. In 2009, sodium chlorate was banned in all EU countries, but consumers were allowed to use and store the product until May 2010.

Perchlorate is industrially produced by oxidation of sodium chlorate solutions in electrolysis.

When used in combination with atazin, it can increase the persistence of most effects.

Oxygen can be obtained by high temperature decomposition.

It can produce chlorine dioxide in appropriate conditions.

Agriculture
Used as a non-selective herbicide in killing weeds. It is considered to be phytotoxic when used in all green plants.

Paper
It is widely used in paper pulp processes.

Rocket
It is used in the production of ammonium perchlorate used for rocket propulsion.

Explosive
It is generally used in the production of potassium chlorate for explosives. It is also used as oxidizing agent in uranium grinding.

Chemistry
It is used as a source of oxygen.